As 2017 gave way to the new year, President Trump announced one of his first foreign policy objectives of 2018 to take a harder stance on Pakistan by cutting aid to Pakistan.

The U.S. provides aid to Pakistan in several forms, including over $9 million in election support through the International Foundation for Electoral Systems, and between 2002 and 2010 Congress approved $18 billion in military and economic aid, as well as an additional $15 billion between 2010 and 2017.

According to the State Department and the Financial Times, nearly 70% of military aid was misspent between 2002-2007 and used to cover a civilan deficit, which the Pakistani government argued was caused by economic woes.

It is difficult to specifically track how aid is utilized because much of the appropriations are handled through contractors and secrecy until recently. A significant portion of aid ends back in the US due to multinational contractors.

The United States has foolishly given Pakistan more than 33 billion dollars in aid over the last 15 years, and they have given us nothing but lies & deceit, thinking of our leaders as fools. They give safe haven to the terrorists we hunt in Afghanistan, with little help. No more!

Last August Trump detailed his plan for the War on Terror to increase troop presence and to end the silence about factions in Pakistan’s support and role in the spread of terrorist cells.

This Tuesday U.N. Ambassador Nikki Haley concurred with Trump’s sentiment and accused Pakistan of “playing a double game for years”. Haley also announced that the U.S. will withhold $255 million in aid to Pakistan.

According to Haley, “They work with us at times, and they also harbor the terrorists that attack our troops in Afghanistan. That game is not acceptable to this administration.”

Pakistani government officials called the comments “completely incomprehensible” and damaging to relations between the two nations.

Pakistan has been one of the U.S.’s closest partners in the War on Terror, and specifically in Afghanistan where it serves as a key resource for intelligence, supply chain, and counterterror support in the region.

However, elements within Pakistan’s government and disarray between the nation’s military and government have complicated effective policy.

A report from the State Department in July 2017 outlined that Afghan-oriented militant groups such as the Taliban and the Haqqani Network benefit from support from the Pakistani government.

According to the report, “Although Pakistani military operations have disrupted some militant sanctuaries, certain extremist groups such as the Taliban and the Haqqani Network were able to relocate and continue to operate in and from Pakistan,”

The report expounds that

The Afghanistan-Pakistan border region remains a sanctuary for various groups, including al-Qaeda, al-Qaeda in the Indian Subcontinent (AQIS), the Haqqani Network, Lashkar- e-Taiba, Tehrik-e-Taliban Pakistan (TTP), Islamic State, and the Islamic Movement of Uzbekistan. Sanctuary on the Pakistan side and presence on the Afghan side remain a security challenge for both countries and pose a threat to regional security and stability.

While increased collaboration between Afghanistan, Pakistan, and the U.S. is critical to maintaining pressure on militant groups, and for maintaining security on the border, the trust deficit from Pakistan’s support of extremist groups hampers collaboration.

According to the Pentagon, “These efforts have largely ceased following major high-profile terrorist attacks in both Afghanistan and Pakistan and public statements by each government disparaging one another. Each country publicly claims that the other provides sanctuary to certain militant groups and lacks the will to combat them,.

The latest move by the U.S. brought criticism from Maleeha Lodhi, Pakistan’s Ambassador to the United Nations, who stated that Pakistan has made a substantial contribution to fighting international terrorism and that Haley and Trump’s remarks paint the nation in an unfair light.

“US spokespersons should not shift the blame for their own mistakes and failures onto others,” said Maleeha Lodhi. “We can review our cooperation if it is not appreciated. Pakistan’s cooperation is not based on any consideration of aid but on our national interests and principles.”

On Tuesday Pakistan’s Prime Minister Shahid Khaqan Abbasi led a National Security Committee meeting with the nation’s Foreign, Interior, and Defense ministers, as well as representatives from the army, navy, and air force to respond regarding the nation’s security policy.

In a press release, the NSC described “deep disappointment” at the US’s comments, which they claim were “completely incomprehensible as they contradicted facts manifestly, struck with great insensitivity at the trust between two nations built over generations, and negated the decades of sacrifices made by the Pakistani nation.”

In a tweet the Pakistani government detailed their support specifically to the War on Terror, as well as how the conflict has impacted their nation.

#Pakistan has rendered countless sacrifices in War against Terrorism and has always taken indiscriminate action against any form of extremism.
Our commitment for lasting peace is unequivocal.
#PakistanFirst 🇵🇰 pic.twitter.com/kPBgAKpzdX

“Even more importantly the huge sacrifices made by Pakistan, including the loss of tens of thousands of lives of Pakistani civilians and security personnel, and the pain of their families, could not be trivialized so heartlessly by pushing all of it behind a monetary value — and that too an imagined one,” the statement said.

Several members of the Difa-e-Pakistan Council, a group of Islamist parties, held demonstrations against the US in Karachi, and burned effigies in protest of the announcements.

The US Ambassador David Hale has also confirmed a meeting with Pakistan’s Foreign Ministry to outline next steps. 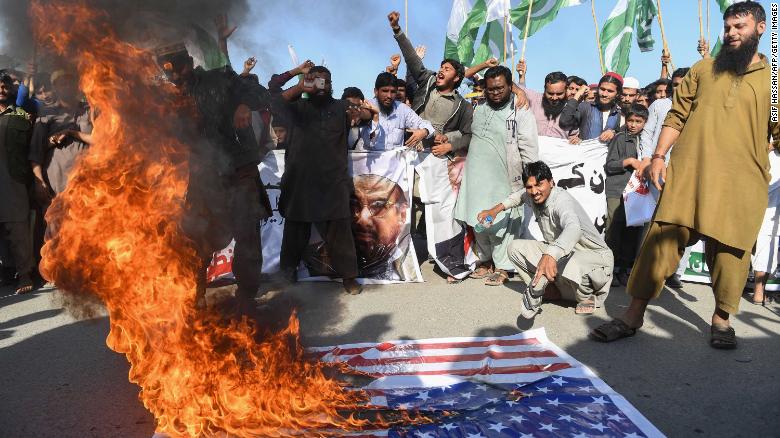 Pakistani citizens burn an American flag in effigy in response to comments from the Administration Source: CNN