On Thursday the United Nations voted on a resolution to repudiate the United States’ call to move the American Embassy.

Earlier this month, President Trump addressed the nation in a briefing to announce the United States’ plan to move the American embassy from Tel Aviv to Jerusalem.

Despite threats from the President to cut funding to the UN, and comments from US Ambassador to the UN Nikki Haley, a resounding majority of UN Member States voted to reject the US’s decision.

According to a tweet from Haley, she addressed the delegation and confirmed the US’s commitment to the UN as a body, but also stressed the expectation of goodwill from UN members to stand by their decision.

Haley claimed she would be “taking names” of representatives from countries voting for the resolution.

.@nikkihaley: "The United States is by far the single largest contributor to the @UN… We'll be honest with you: when we make generous contributions to the UN, we also have a legitimate expectation that our goodwill is recognize and respected." pic.twitter.com/mCE0be2oUj

Despite Haley’s address, the vote went forward. On Thursday the UN General Assembly voted on a non-binding resolution to declare a unilateral recognition of Jerusalem as Israel’s capital “null and void”.  128 countries voted in favor of the resolution, Nine countries voted against, while 35 abstained.

It is important to note that the UN’s resolution is non-binding, however, the move shows how the international community’s policy positions differ from the stance of the US on this issue.

According to Al Jazeera, representatives from Palestine and Palestinian allies were satisfied with the vote as a reaffirmation of their belief in Jerusalem as occupied territory.

“This decision reaffirms once again that the just Palestinian cause enjoys the support of international community, and no decisions made by any side could change the reality, that Jerusalem is an occupied territory under international law,” Nabil Abu Rudeina, spokesman for Palestinian President Mahmoud Abbas, said in a statement.

Today, the international community once again showed that dignity and sovereignty are not for sale.#Turkey #Palestine and all other co-sponsors thank every country that supported #UNGA resolution on Palestine. pic.twitter.com/nw4Up6U8Fk 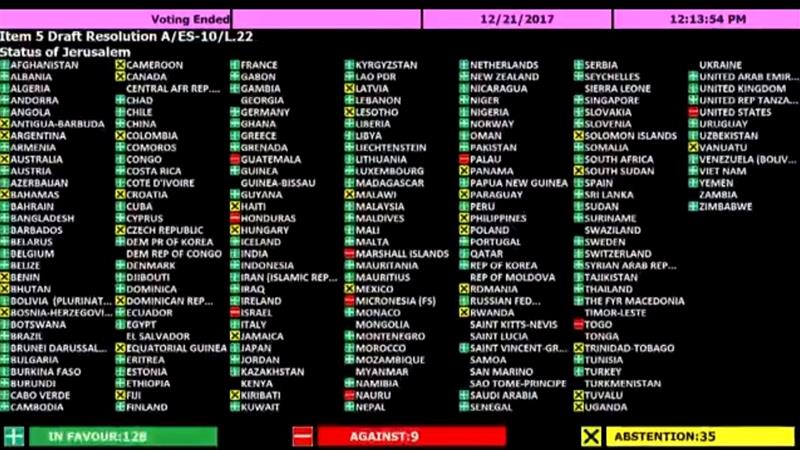 A list of the UN Vote by nation Source: Al Jazeera

Countries that Voted For the Resolution:

Many Arab countries, Russia,Turkey, and US allies such as the UK, the EU, Latin America, and African nations voted for the resolution. for a full list, refer to this link. or to the above image.

Countries that Voted Against the Resolution: